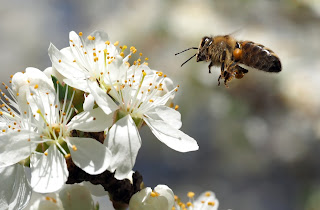 Honey bees are super-important pollinators for flowers, fruits and vegetables. This means that they help other plants grow! Bees transfer pollen between the male and female parts, allowing plants to grow seeds and fruit.


Honey bees live in hives (or colonies). The members of the hive are divided into three types:


Queen: One queen runs the whole hive. Her job is to lay the eggs that will spawn the hive’s next generation of bees. The queen also produces chemicals that guide the behavior of the other bees.


Workers: these are all female and their roles are to forage for food (pollen and nectar from flowers), build and protect the hive, clean and circulate air by beating their wings. Workers are the only bees most people ever see flying around outside the hive.

Drones: These are the male bees, and their purpose is to mate with the new queen. Several hundred live in each hive during the spring and summer. But come winter, when the hive goes into survival mode, the drones are kicked out! 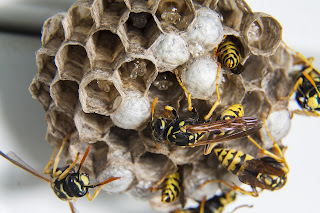 Yellow Jackets are social insects that live in nests or colonies with up to 4,000 workers. They are most active in the late summer and early autumn when a colony is at its peak. Yellow Jackets feed on sweets and proteins, and therefore these pests commonly invade outdoor events. 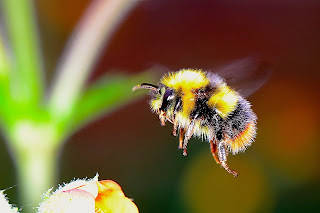 The bumblebee shares several similarities with the honeybee. It relies on the pollen and nectar from flowering plants for sustenance, it produces honey (however it is in amounts far too small to be harvested by people), and it bears black and yellow stripes on a furry, winged body. But unlike its hive-dwelling cousin, the bumblebee has some fascinating nesting behavior. When we think of bees and wasps, we usually envision a papery ball hanging from a tree branch or a wax honeycomb filled with worker bees. While a bumblebee nest may take shape in a tree and does involve the production of some wax, their homes don’t resemble that of any other stinging insect. 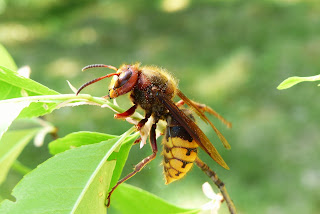 The adult European hornet worker is approximately 25mm in length with yellow and brown coloration. The overwintering queens are somewhat larger -up to 35mm. The nests are typically located in a cavity, such as a hollow tree or wall void. They will rarely appear freely suspended like the football-shaped bald-faced hornet nests. The entrance to European hornets' nests are frequently 2 meters (6 feet) or more above ground. In some instances, a portion of the gray, papery nest extends outside the cavity/void. 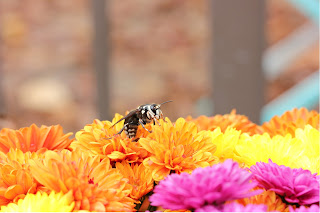 Despite its common name, the Bald-Faced Hornet does not rank as a true hornet, proving once again that names can be deceiving. This eusocial insect actually constitutes a species of the yellow jacket that constructs rather large conical nests, built from paper-like materials. The colonies of this rather impressive invertebrate sometimes contain as many as 700 workers. This counts as the largest number of workers of any species within its genus. The insect builds its nests typically in trees, or under the roofs of buildings. The yellowjacket will aggressively defend the nest, repeatedly stinging possible predators. Its distinctive name derives from the fascinating markings on its face. These, along with its overall coloring, distinguishes it from others in its genus. 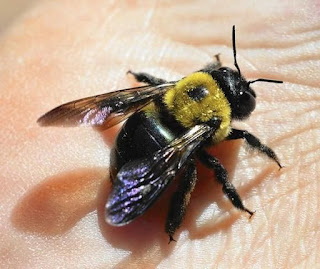 Their name comes from the fact that nearly all kinds build their nests in burrows in dead wood, bamboo, or structural timbers. The exception would be those in the subgenus Proxylocopa which nest in the ground. Members of the related tribe Ceratinini are sometimes referred to as “small carpenter bees”. The bee is traditionally solitary, though some have simple social nests in which mothers and daughters may cohabit. 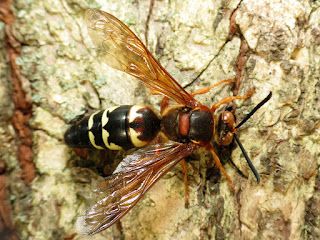 Mild mannered female cicada killer wasps are active across the south during the summer, intent on their tasks of 1) digging underground burrows and 2) provisioning them with paralyzed cicadas that will be food for their grub-like larvae. The wasps will be very focused on these tasks for several weeks. 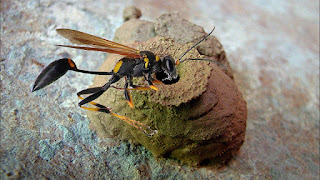 Mud daubers are solitary wasps that construct small nests of mud in or around homes, sheds, and barns and under open structures, bridges, and similar sites. Several species exist in Iowa. These wasps are long and slender with a narrow, thread-like waist. Some are a solid steel blue or black but others have additional yellow markings.